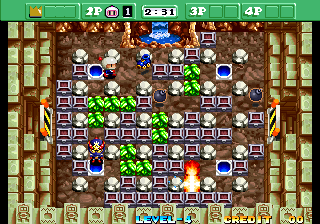 As Bomberman, you must kill all the enemies in the level before proceeding to the next. To do this, you clear a path of blocks by setting bombs that will detonate a few seconds later, and then use the bombs to wipe out enemies. Some blocks will uncover power-ups, and depending on which ones you collect, you will receive more bombs, more lives, more time, manual bomb detonation, expanded blast zone, and the ability to move faster. In some levels some blocks will reveal eggs that you can hatch to produce a bird that you can ride on. The bird allows you to take an additional hit from an enemy or bomb blast without losing a life.

After all enemies have been killed, you must find the "escape hatch", so that you can use it to exit the level. There is a 3-minute time limit, but this can be extended by finding the appropriate power-up. Points are awarded after exiting the screen based upon how much time is left; more time equals more bonus points.

Besides this single-player mode, you can play against another player or just play against the computer, and the object is to destroy the opponent. Whoever wins five matches first, wins the round.

Reviewer: Chuddley23 - favoritefavoritefavoritefavoritefavorite - March 16, 2021
Subject: Quality of Play
What truly sets this Emulation apart from most others is the seamlessness of frame-rate. The controls are wonky, just a simple Tab button and that remedies that. I have loved the Bomberman games for a long while and this is a must play. Thank you for uploading this to the library.